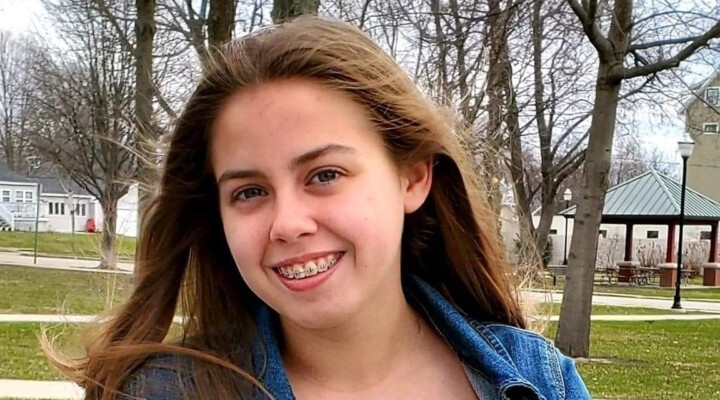 Hi! My name is Genevieve Lux, I’m 16 years old, and live in Ludington, Michigan. Currently I am a sophomore at Ludington High School where I run cross country, participate in track and field, sing in choir, and am a member of the National Honors Society. Other key facts about me are that I love to read, plan to earn a degree in teaching, and I beat cancer. Yes, I had cancer and it all started at the tail end of fifth grade when I was just 11 years old.

First, my neck nymph lodes started swelling. They grew so big that I just decided to name them: George (right side) and Leonard (left side). My parents took me to the doctor where I was prescribed some steroids and told that they would recede in a little while. So, I continued on with my life by going to school, playing, and even running 5Ks! Eventually though, it got to a point where it was becoming tough to breathe; my parents immediately took me to Helen DeVos Children’s Hospital. Once there, the doctors performed numerous tests on me and at last performed a biopsy on my lymph nodes. When I awakened on May 29, 2017, a port was in my chest and I was informed that I had T-cell Acute Lymphoblastic Leukemia, an aggressive form of blood cancer.

Thus began about 2 years of chemotherapy wherein I achieved remission in the first month. Despite encountering quite a few difficulties along the way, I stayed my stubborn self, kept going to school as much as possible, and even joined the cross country team in my first year of middle school! Good memories also emerged from my diagnosis such as visiting Europe for my Make-A-Wish trip or attending camps with other kids who have/had cancer. It was never always a doom and gloom experience since I had so many people’s love and support. Particularly the Childhood Cancer Campaign.

The Campaign organized fundraisers for my family which were an enormous help for buying groceries, car repairs, hotel stays, and especially for the trips back and forth between Ludington and Grand Rapids. Before my diagnosis, I had been involved in raising money for the Childhood Cancer Campaign, but had never really known the depth of appreciation felt by those families. I can safely say that it is a joy to see the community band together to provide an outpouring of assistance and care during a time of need.

In September 2019 I finished treatment and came out of those 2 years with maturity beyond my age and a braver spirit than a soldier. Now, I look forward to my 5 year anniversary of ending chemotherapy when I’m 18 so that I can celebrate being officially cured with my family, friends, and the community

Just scan the QR code with your Venmo App.